On 7 January 2017, Het Syrische Comité organized the “Syria wants Freedom” media campaign in partnership with more than 16 cities around the world to focus on the humanitarian goals of the revolution and its demand for freedom and democracy.
The campaign was attended by dozens of Syrians who stood in Dam Square in Amsterdam, where flyers where handed out to the passerbys and attendees to spread the goals of the campaign 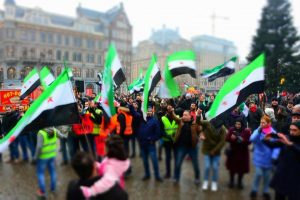