In the shadow of the revolution and the events that accompanied it since 2011, Syrian women were subjected to special suffering in addition to their suffering before the revolution, they also faced new challenges and achieved exceptional leaps that would not have been under the shadow of the Assad regime.
What is the Syrian woman’s role in society? How did the revolution affect it and what was her role in the events of the revolution ?! How did the new environments that they lived through after asylum affect it ?! All these questions we tried to answer at the Nofara Café on February 29 in Harlem.

We also enjoyed a short play by Zohour Al Masry. 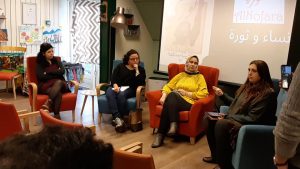